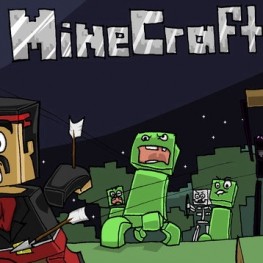 Minecraft is an award-winning computer game that allows students to let their imaginations run wild within a 3D block world.We offer separate camps for Xbox and PC/Mac users, so make sure that you sign up for the right one! PC and Mac-based camps are held in the morning from 9:00 AM-12:00 PM and Xbox-based camps are held in the afternoon from 12:30-3:30. PC and Mac users have the option of two different versions of the camp.

In the Xbox camp students will craft tools, build huge structures, and engineer working contraptions all from the materials found in this virtual world. Students will work in teams to make the city of their imagination, complete with farms, working railroads, and their own unique houses. They will build objects such as bows and arrows and use them for target practice. Students will have the opportunity to play games such as hide and seek within the city they have created.

In week A of the PC/Mac camp, students only have five days to compete with neighboring societies of students for the only chance their society has for survival: the Totem of Undying. But, here’s the catch! There are only enough Totems of Undying for one society! The society that best treats its players, gathers resources, fights, and defends their totems wins! For this challenge, it does not matter how skilled your child may be at Minecraft’s combat mechanics, their teamwork skills are what will allow them to win. Each day of gameplay will end with a fun game such as capture the flag or hide and seek.

In week B of the PC/Mac camp, students have five days to complete all the fundamental characteristics of a prosperous society while keeping Minecaft’s bosses at bay. They will eventually take on the hardest challenges Minecraft has to offer. This RPG journey will take them through the depths of the ocean, through dangerous dungeons, escaping the Minecraft’s equivalent of the underworld, and together slaying the Ender Dragon. Each day of gameplay will end with a fun game such as capture the flag or hide and seek.